The committee started holding official meetings a few weeks ago, and its main purpose is to raise awareness and educate others about race. Thibault says, “RAC is all about bringing race to the consciousness of CVU, because I think race goes unspoken about and it’s unaddressed in our curriculum as well as our CVU culture.”

Thibault’s purpose for the club is what initially sparked her intent for co-founding the committee. She states that last school year she felt very impassioned about recognizing Black History Month at CVU. She got some momentum with Adam Bunting and Rahn Fleming regarding education about race, and with that momentum she got students from Montpelier High School to come to CVU and give an assembly.

At that time there was an attempt at starting a Racial Alliance Committee at CVU, but according to Thibault, it didn’t work out so well due to a lack of leadership. This year, however, Thibault was determined to keep the ball rolling, and started up RAC for a fresh start. 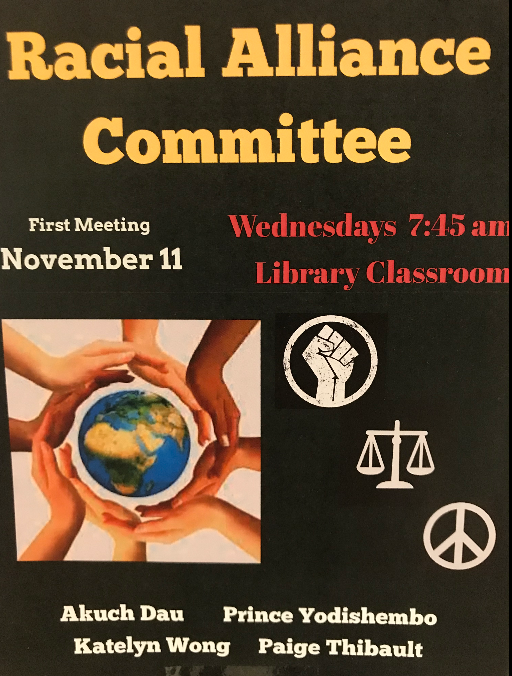 One of the RAC posters around CVU

Katelyn Wong joined the original group, who also provided a clear purpose for RAC. She expressed her feelings on how in today’s current political climate a lot of unacceptable things are happening  that shouldn’t be allowed. “Our mission or movement is to talk about those things with people and to start the conversation because I think that when something is uncomfortable people laugh it off and [say] ‘Oh it doesn’t happen’. I think it’s OK to be uncomfortable with these things because they’re really hard.”

Thibault also addresses the importance of RAC in connection to the majority of white students at CVU. “CVU is a great social justice community but I think that race is often left out of the conversation. You could point that to [being] such a white school, such a white state, but I think regardless it’s really important to bring it up.” Thibault also emphasizes the importance of the club creating a safe space for those of color and anyone wanting to express their feelings about race.