Should we eat insects? The gross crawling creepies that scare us and look nasty? I believe that this will be in our meals in the distant future. The protein and efficiency you get out of insects is crazy, and world hunger is a major problem we must combat as a species. The answer to our famine, is under our feet. 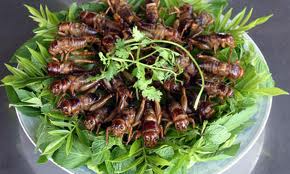 There’s a gigantic world hunger problem right now, with parts of Africa and Asia having the most countries in complete hunger chaos. If we were to increase hoofed animal production, or chicken and turkey production, it will fail. Scientists have already predicted that if we reached a population from 1.7 billion to 3 billion by 2025 or later, that the world would reach a max capacity for beef pork or chicken production. The world can’t withstand and handle that much C02 release and there isn’t enough room to hold that many production farms.

We need a better method for feeding the rapid growth of our population. Animals you see and hear of everyday in our food isn’t gonna work forever.  According to Sara Boboltz in an article on the website Huffpost “Here’s the number one reason to eat bugs: they’re good for you! They’ve got protein, fiber, healthy fats, vitamins and essential minerals. Nutrients differ, of course, by species, age and preparation method, but grasshoppers in particular are packed with about just as much protein as lean ground beef with less fat, and mealworms are typically a fair substitute for fish. Some caterpillars have more protein by weight than a turkey leg — and more fat, too, but it’s a healthier, monosaturated kind.” Insects are an amazing solution to the problems we face. They provide more protein than the animals we eat now, so people that are starving can gain the nutrients they need to keep going.

This also leads to helping obesity in the United States. You can eat less of bugs and still gain the same amount of nutrients as a couple hamburgers. This benefits for the reason that people will eat less to be more satisfied with the insect diet. This means healthier people and in the long run a much better healthier world.

By switching to insects we can provide more food to help stop hunger and to lower people’s weight over the course of time. It makes the United States hoard food less and distribute food more to the other countries in need. So we as a human race can survive and world hunger could be finally stopped.

Let’s talk about the efficiency of insects and costs. Look at the picture below. 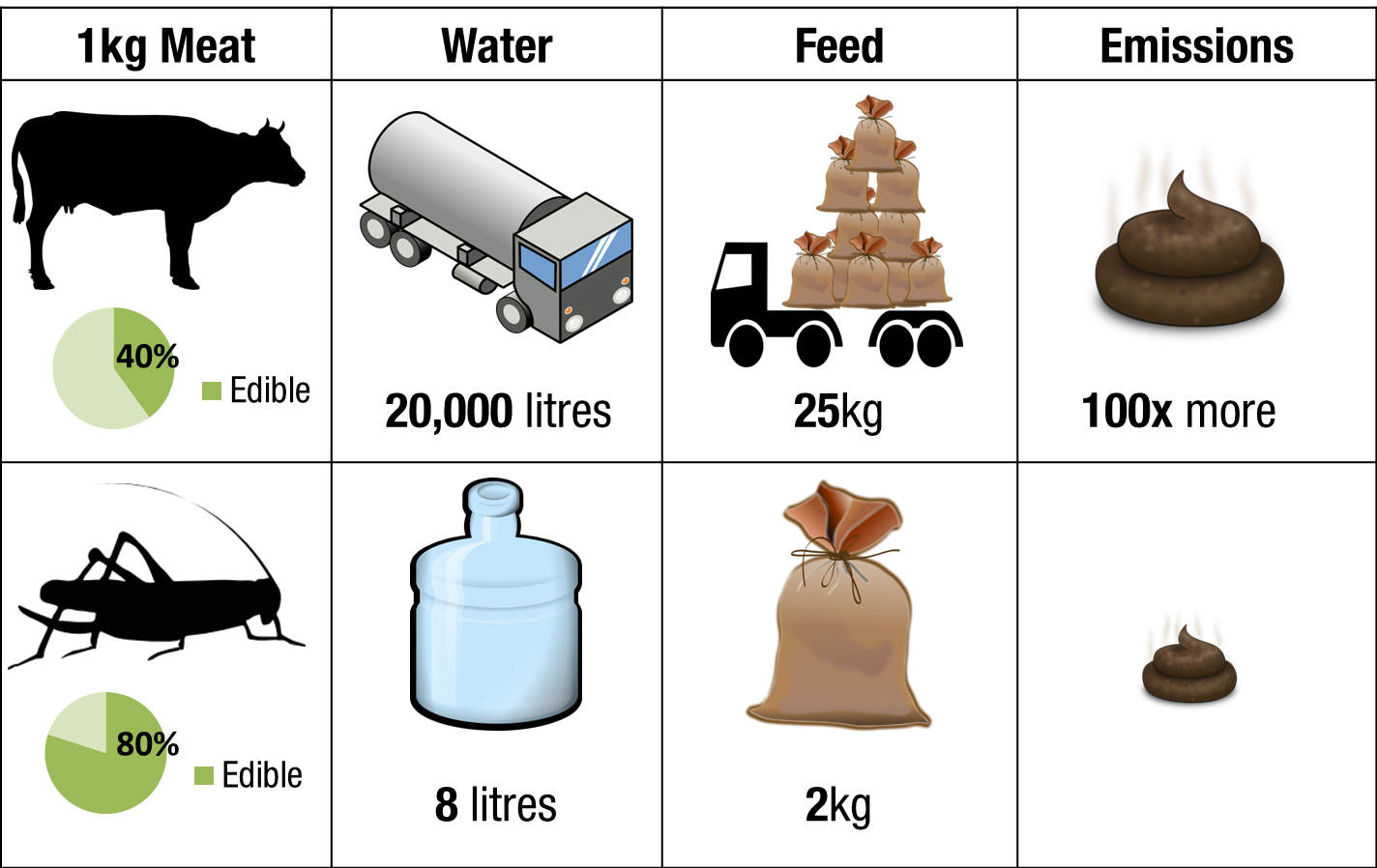 Infographic from The Bug Shack (UK)

The picture shown is so clear to the truth and what our world will come to if we continue. Cattle is the most farmed animal in the United States, and these are the comparisons. You get double the percentage of edible product from insects, a overwhelming decreased amount of water usage and barely any feed. The C02 and emissions (feces) is significantly reduced when insects are being farmed instead. Now we aren’t getting rid of milk we need the product, so we can’t completely get rid of cows and that’s not what is suggested. Milk and beef will still be around regardless, but just produced less. I wouldn’t consider it becoming a delicacy and only available to the rich, but it definitely will be reduced in production. We don’t have to get rid of cows completely but we need to replace a good 50% of these cow farms with insects at least.

This also ties in with the greenhouse gases, which we are producing way too much of. “In addition, insects actually like being confined to tiny spaces. Unlike chickens and cows and other animals who would prefer, we assume, being kept on “free-range” farms, bugs don’t mind being cooped up together in one massive cage. If farmed on the same scale, the U.N. report states insects would require “significantly less” water and land resources than traditional livestock.” (Huffpost, by Sara Boboltz) and the land we are using can be deducted and used for other things. Less land used for farming that causes a lot of C02, by replacing those with insect farms it frees up land for other uses. Cropland could also be reduced on a smaller scale provided that a certain species of insect can be a good supplement for a vegetable, but the vegetables and fruits can be left alone more. Also with the increased land we can have more beekeepers, increasing pollination. Pollination equals better quality fruits and vegetables, and honey products. So in reality insects have so many uses for our economy in saving money and efficiency. The United States would save millions of dollars by switching over to the insect way.

Insects are a great way to solve so many problems, and mother nature is a powerful force. We had the solution all along but we are being too stubborn and won’t give up what we are used to. Eventually we will feel the wrath that nature is gonna bestow upon us. Once we use up too much land and are farming too much inefficient animals, our species will ruin the Earth and we’ll die. Nature doesn’t like inefficiency and that’s what we are: inefficient. Nature will remove us and continue life without us because we won’t fit in with the efficiency problem and how we manage Earth. So my people, we must switch to insects and help out our species and the world as a whole. Switching to creepy crawling bugs will save us all, so should we? I think we will.