For the Library, Change is Constant and Connections are Consistent

The CVU library is a place students come to study, socialize, and collaborate with one another. “[It] is a place where people can connect,” said Peter Langella, a CVU librarian. “Students can connect with the school, with other classmates, and with themselves.” Though it may not seem like it at first to many, there is a lot more that goes into keeping the library such a great place. The CVU library is constantly adapting in order to fulfill the needs of the entire student body.

Over the past couple of years, the changes to the library have been noticeable. Whether it be the new rooms in the back or the new tables in the front, the library continues to keep people guessing with refreshing new layouts. “The changing environment of the library makes the learning environment better,” Langella says. “I’ve read some studies that claim people’s brains function better in different environments, and it’s different for every person.”

END_OF_DOCUMENT_TOKEN_TO_BE_REPLACED 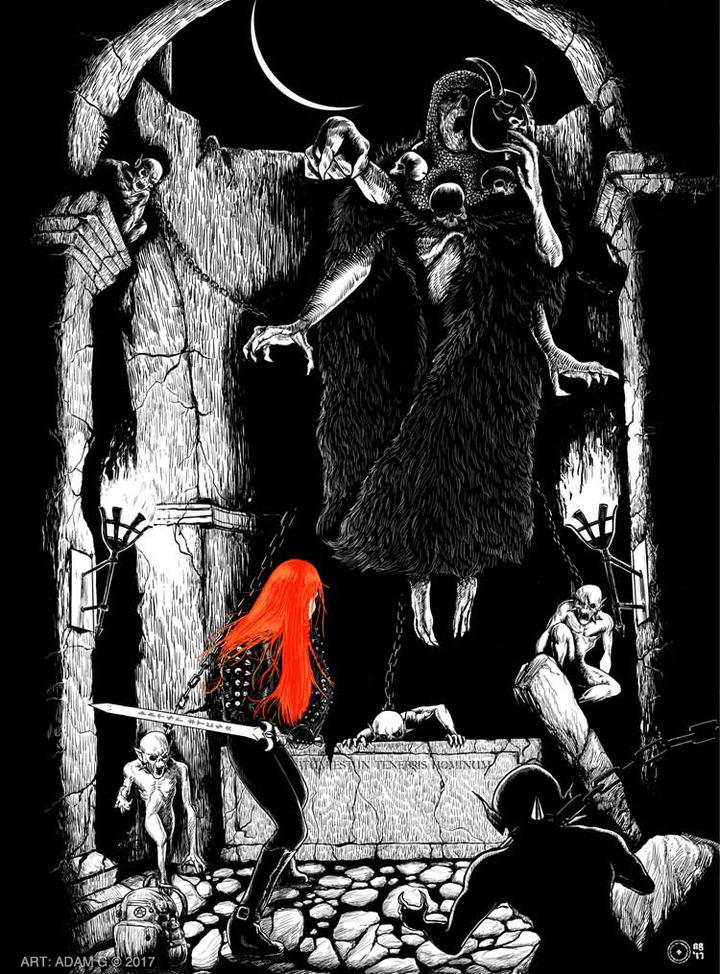 Vermont has been known for decades as a thriving place full of art, culture, and community. CVU does a great job of supporting young artists through many diverse classes, creative clubs, and celebrations, such as CVU’s Celebrate the Arts. Finding inspiration in your community is a great way to expand your knowledge of art, whether you are a viewer or an artist yourself. For this Artist Spotlight, I chose Adam Glazer. Adam is from Cleveland, Ohio and currently resides in Vermont. The reason I chose Mr. Glazer to be put under the spotlight is for his unique aesthetic—one I haven’t seen much of in our community. I reached out to Adam and he was kind enough to answer some of my questions about himself and his art.

When asked what inspired him to pursue art as a career, Adam looked back on interests of his youth, whether it be movies, video games, comics, or album covers. “I think as a kid back in 3rd grade, I started to get fascinated by animation and video games in the early to mid-1980s (I was truly a ‘stranger thing’ before Stranger Things), but ultimately it was the comics that gave me the means to communicate visually as an artist.” He states, “Because I was born deaf with congenital nerve damage in my ears, art was my second language. I got addicted to Dragon’s Lair which was one of the world’s first laserdisc games at the time which blended both animation and gaming together.”

Adam also touched on his love of anime before the genre exploded into American entertainment, and how that kind of animation influenced his artwork. If you spend just a few moments on Adam’s site and blog, Studio Inner Sanctum, you’ll see he also has a love of storytelling and movies. In fact, he talked clearly about how movies such as Aliens, Close Encounters of the Third Kind, Godzilla, and others had inspired him through cinematography and visual design. Another part of Mr. Glazer’s inspiration is the early anime phenomenon in the late seventies and early eighties, with shows such as Battle of the Planets and Star Blazers. Though, Mr. Glazer said, one of the key moments in his childhood was seeing the album art for Meatloaf: Bat Out of Hell. Adam stated, “It was THAT moment that seared into my mind that I’ve wanted to create imagery that sticks with you long after.”

END_OF_DOCUMENT_TOKEN_TO_BE_REPLACED

Meeting a survivor of the Holocaust is something that very few people have done, and it is becoming harder to meet survivors as the event grows more distant in the past.

Survivors of the Holocaust can provide first hand accounts of the terrible things that occurred that can’t be understood by reading, or watching movies. The CVU Holocaust and Human Behavior class had the opportunity to meet David Bayer, a Hungarian Jew who lived through the terrors of the Holocaust.

Bayer told us the story of his life, starting with how he was a well-off Jew living in Hungary. When the Nazis invaded, his life was forever changed. He was forced to live in a ghetto and had to beg for food from Nazi soldiers. When he did this, His peers pointed out to the men that David was a Jew. Bayer described the feeling of being betrayed by his friends in such a way as heartbreaking and sad. A few of the Nazis poured their soup on the ground in front of him, once they knew he was Jewish. CVU senior, and member of the class, Kiera O’Brien, said that Bayer “thought that they were his friends, and they turned on him. That’s hard to think about.” O’Brien also talked about how it was “Upsetting to understand what he had to go through. It is hard to imagine a childhood so altered.”

END_OF_DOCUMENT_TOKEN_TO_BE_REPLACED

A loud boom, followed by a series of loud crashes is heard around the CVU cafeteria. Shortly after, an uproar of voices is heard from the origin of the crash. Looking closer, there is a group of 30 people huddled around a circular table, clapping the victor of the game on his back. The loser sits down in disbelief, disgruntled with his loss. 5 minutes later, the bell rings, and everyone leaves; like nothing ever happened.

CVU has been hosting an underground Jenga tournament for over 2 weeks, and it is just now beginning to gain popularity. The tournament is set up in a loser bracket system, where the worst players compete to be the worst at Jenga. The ultimate loser will face a punishment decided by the winner. 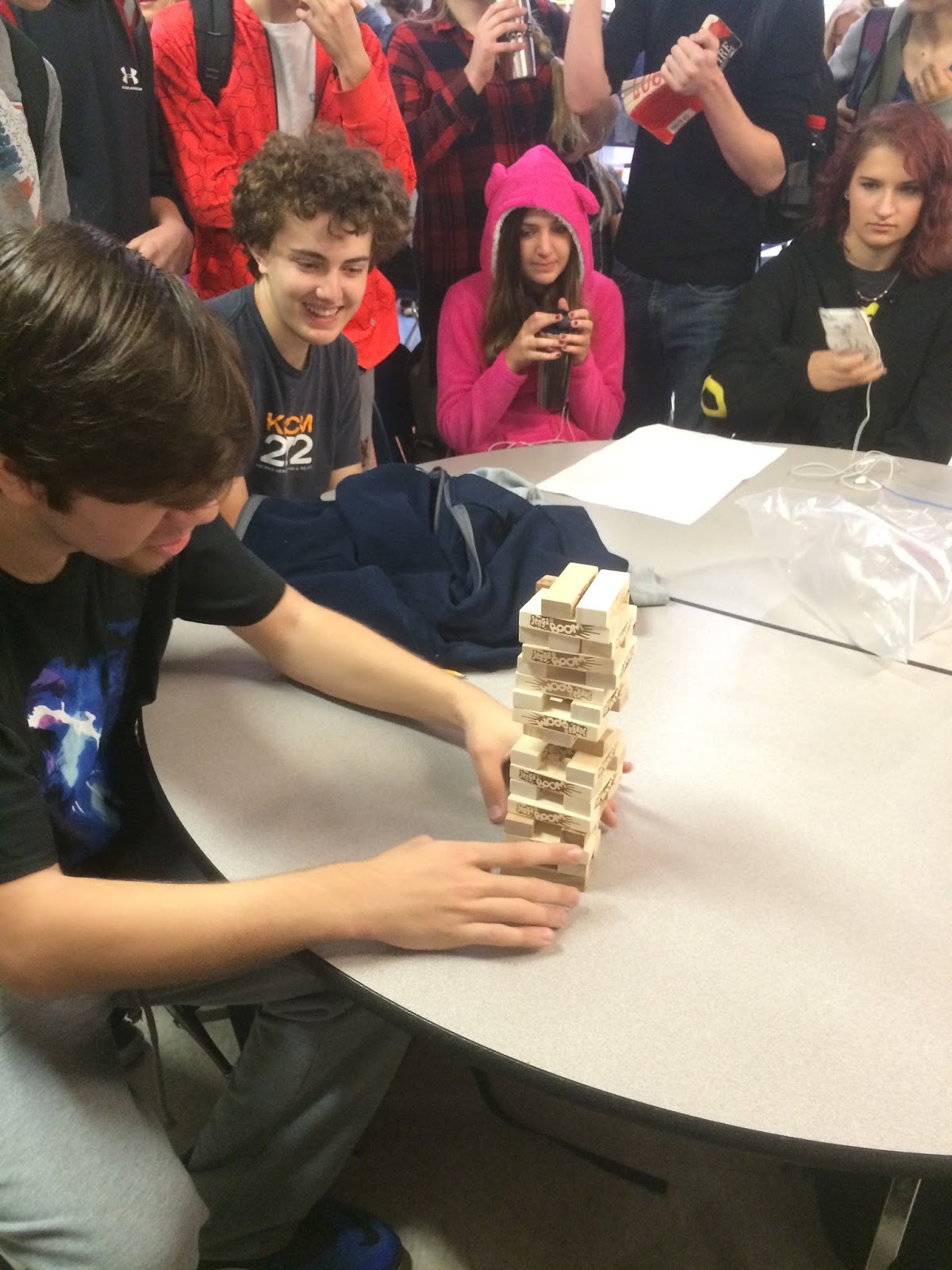 Jaden Rogers strategically removing a block from the tower.

END_OF_DOCUMENT_TOKEN_TO_BE_REPLACED

This video was graciously underwritten by WeVideo.