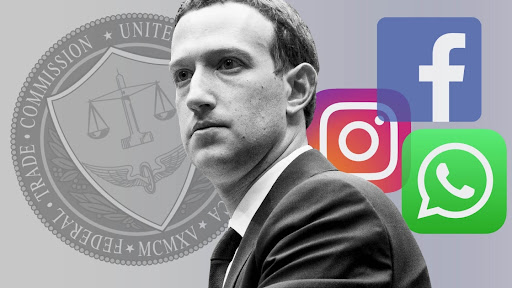 HINESBURG, VT (CVU Journalism class) – Facebook, the social media giant, has come under fire recently with an antitrust lawsuit against the potential monopoly the company poses on the social media world. This claim was brought forward by the Federal Trade Commission (FTC), a federal agency whose mission is to simultaneously promote competition and protect consumers. The prevention of monopolies falls under this objective. The FTC first sued Facebook in December 2020 on the grounds that purchasing competition such as Instagram and Whatsapp in 2012 and 2014 respectively, constitutes an attempted formation of a monopoly. Had this been proven, Facebook would be broken up as a penalty.

When the lawsuit was brought to court, Facebook spokesperson Commissioner Christine S. Wilson commented, “The case is entirely without legal or factual support.” Judge James Boasberg was of the same opinion, ruling in favor of Facebook, and dismissing the complaint. Boasberg commented on the ruling of the case, and speculated as to why the FTC’s complaints were initially rejected. “The Court is aware of no case, and Plaintiffs provide none, where such a long delay in seeking such a consequential remedy has been countenanced in a case brought by a plaintiff other than the federal government.”

However, this wasn’t the end of the lawsuit. While the initial claims were dismissed, the judge granted the FTC 30 additional days to refile their complaint. In order for the complaint to be considered, the FTC had to provide sufficient evidence proving that Facebook had monopolized the industry. This would be done by presenting evidence showing Facebook’s market share to be 60% or or higher. The plaintiff’s second attempt at breaking up the company ended in failure yet again, with the court upholding its initial decision.

One implication of this ruling is the effect on social media users. With Facebook being able to stay a single company, its power and influence is kept intact. This means that the tech giant has the ability to continue purchasing other competitors just as it did in 2012 with instagram and 2014 with Whatsapp. Other social media platforms that aren’t able to compete with Facebook will end up being bought and could change from its original form. Consumers who initially used the service may see unwelcome changes after the merge.