High schools across Vermont are removing teachers from instructional positions to enable students to create their own course. The curriculum? Whatever they want it to be; self-directed learning classrooms are designed to allow students to choose their own path of study. In this model, teachers become facilitators to help students structure their projects and set realistic goals to produce tangible results.

These classrooms allow students to learn subjects or experiences that their schools do not offer. Students choose to pursue internships, language classes, studying a specific historical period, learning a new instrument; the possibilities are vast.

CVU has implemented its own self directed learning environment with Nexus. 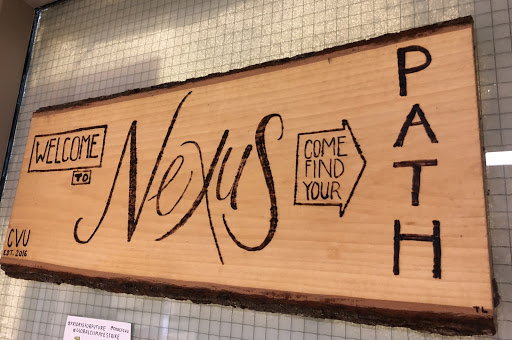 Peter Booth and Troy Paradee are two of the four teachers in the program. “Our mission statement is to provide a space and support for students to pursue interests that are not already available in our curriculum,” says Paradee.

Booth explains the other factor that started the program. “Part of the idea is to – as a school – recognize that kids do lots of [learning outside of school] where they learn stuff unrelated to school. Why can’t the school say, ‘Hey, look at this thing this kid did,’ and give them credit?” Nexus bridges the gap between student interests (outside of school) and students’ academic world.

Although Nexus focuses on allowing students to make their own choices, they are still responsible for completing work and providing evidence for their learning. Do students actually reach their goals? “In the majority of cases, absolutely, yes; in some cases, no, but that’s no different from any course in the building,” says Paradee. “We’re probably maybe more successful because kids want to be doing what they’re doing in here.”

“In terms of kids coming to Nexus, making a plan, getting credit and leaving, having had a good experience, I would say it’s very successful,” says Booth.

Some examples of projects that students are undertaking are studying sport analytics, writing and recording original music, building a wind turbine, writing a book and studying the effects of music on the brain. With so much variety in topics, how can an individual project be graded?

“We assess their ability to work through the process – the critical thinking around decision making and goal setting and when and how they work through stuck points – and we can actually see that in the process,” says Paradee. In addition, explains Paradee, a student’s ability with “explaining and self assessing their learning” is important for grading.

According to Paradee, the program has seen significant growth since its initialization four years ago.“We started with seventeen, then that went to thirty, then that became forty.” Although CVU’s self directed learning class only started four years ago, other schools have implemented similar programs. How many? “Probably more than we know,” says Paradee.

Paradee and Booth mentioned that a common inspiration for these programs are stems from Vermont Statute that encourages reflection on one’s learning process by mandating schools in the state to have students formulate Personalized Learning Plans, or “PLP” profiles. But what is the goal of these profiles? According to Vermont statute, “The plan shall define the scope and rigor of academic and experiential opportunities necessary for a secondary student to complete secondary school successfully, attain postsecondary readiness, and be prepared to engage actively in civic life.” Since the State of Vermont requires schools to adopt a plan around self-directed learning, schools like CVU have embraced this movement and created their self learning targets for students not enrolled in a class of independent study.

Carly Rivard,CVU PLP Director, explained the process of integrating PLP targets into regular school work. “We have all students creating PLP sites in Google. We will be working on adding content to these sites and developing students’ stories throughout the year in advisory,” says Rivard.

According to Rivard, the state mandate has not changed much within other classes, but rather attempts to make students reflect on their learning process outside of the classroom. “I think the student-led conferences in the spring, especially the 9th-grade meetings, have been very successful,” says Rivard.

“Students are given the chance to reflect on the year so far and to share some of their successes and failures with their advisor and caretakers (parents and guardians). Much of the feedback from all parties has been positive.” What’s in the future for self directed learning in schools? For Rivard, it’s all about improving the program.

“We have yet to develop a personalized learning process that supports student ownership. We need to work out some kinks around the purpose of the process for students and to clarify why students should take the time to share their stories in a thoughtful way.” Rivard believes the program has not yet reached its full potential, but is optimistic. “I believe we are moving in a positive direction,” she says.