“ Hearing the cheers and support from the fans the night of the show made all the hard work worth it,” designer Delaney Brunvand, a CVU senior, recounted from the night of September 7th, when she and four other students from CVU showcased their designs to a supportive crowd in the annual Art Hop fashion show, known as ¨Strut¨.

Students filled the Generator Maker Space leading up to the 6:30 and 8:30 shows to see their classmates and friends model or display their designs.

This year’s catalog of talented designers included five CVU students- Cam Cuttitta, Cassidy Frost, Cole Glover, Delaney Brunvand, and Emma Destito- all of whom were assisted by other students who modeled their designs. 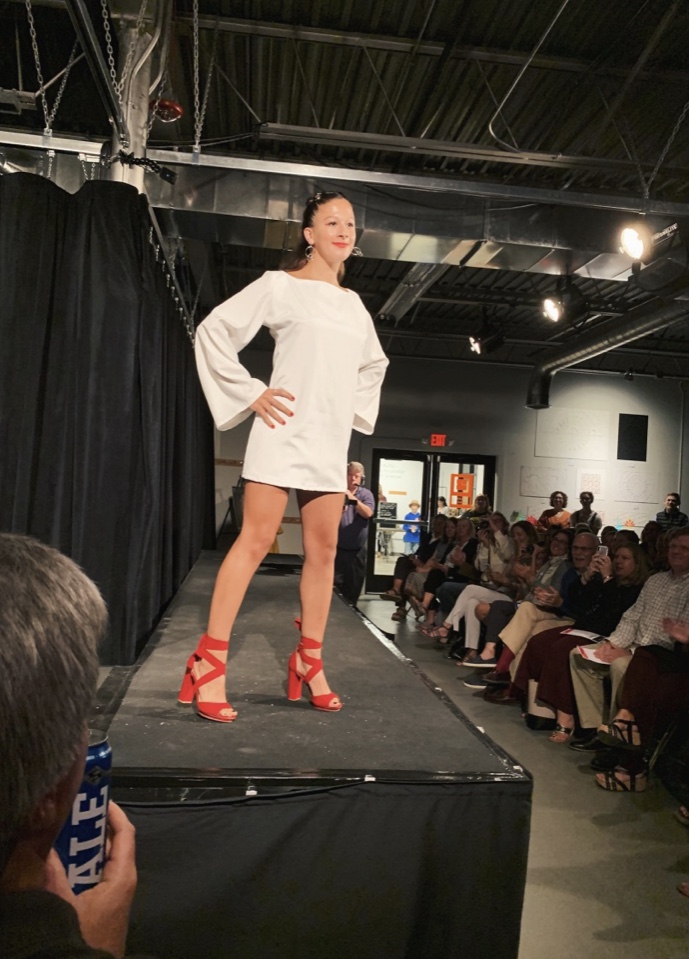 “ As a high schooler, I never dreamed of doing something like Strut. The fact that there are students who plan for this all year long to show their work and then go on to pursue a career in the arts is incredible,” commented Strut coordinator Wylie Garcia on the large amount of student involvement in the show.

This year Strut celebrates its 15th year as a popular annual event featured as a part of Art Hop in Burlington.

In partnership with Seven Days, the show is put on by the South End Arts and Business Association (SEABA), who on their website describes themselves as “ dedicated to promoting Burlington’s Pine Street corridor and growing its number of artists and businesses-large and small.”

Tickets to the shows retailed for twenty dollars and were completely sold out in the days leading up to the event.

“The hardest part was being confident and walking on the runway and not caring how many people are watching,” commented student model Kimberly Nguyen, “The most rewarding aspect, however, is the process of the show and watching my friend Delaney really grow as a designer.” This is Nguyen’s first year as a model, but Delaney Brunvand’s second year as a designer.

“ My inspiration this year was music artists and what they wear during concerts,” seventeen-year-old designer Delaney Brunvand from CVU commented on her red and white ensembles. She displayed five outfits in total, this year including a men’s outfit for the first time. Brunvand discussed how she became involved in Strut, saying that her interest in sewing and design is what got her involved with the event.

Many past young designers have gone on to pursue fashion beyond high school. The event was not always a launchpad for fashion careers, Art Hop Coordinator Lisa Condon mentioned, but Strut has definitely transitioned to showcasing more designers interested in legitimate careers in the fashion industry. “We have now had several designers go on to be in the fashion world from NYC to college,” Condon said.

The talented array of students whose work was displayed at Strut brings forth the question- what are the other hidden talents in our community? Events like these shine a light on the many skills of those in our school and gives them recognition in a broader audience. The confidence displayed by the models and designers may encourage more people to strut their unique style a little more in their everyday lives.